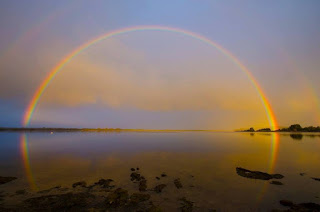 ’We must be willing to relinquish the life we've planned,
so as to have the life that is waiting for us.’
Joseph Campbell
Have you noticed the moment you try to take a detour around something, you end up going places you never dreamed of? Sometimes it brings you to wonderful experiences where the unexpected is your reward.

What happened here recently was that  I tried to gently nudge my readers away from this Gateway to follow a trail of inspired new posts on my website.

Intrepid blog followers are welcome to hear my FIRST story transformed into an audio narrative, Many Different Hats - link below

But I learned that readers were still enjoying the many posts here when I received an invitation from the Lighthouse Foundation for the Blind (California).

One of their staff had visited the Gateway and wanted to share the news of their recent announcement about an amazing new series of prizes aimed at changing perceptions about what blind people are capable of doing in their community.

If, like me, you can answer their first question, ‘What would you do with $25,000 to make your most ambitious dream a reality’ (Sorry, sighted people need not apply), and if you can put together a 90-second video application, then you might be interested to see how this initiative by the Lighthouse is supporting blind adventurers worldwide in pursuing their most ambitious projects yet.

One of the first blind entrepreneurs who circumnavigated the globe in 1832 was an Englishman called James Holman. Widely known as ‘the blind traveller’, Holman’s adventures earned him great respect for successfully undertaking a series of solo journeys across the globe – totally blind!

In honour of his accomplishment, the Lighthouse are offering the Holman Prize to celebrate innovative people who want to shape their own future by sparking ambitious dreams of their own.

“LightHouse’s initial 2017 prizes will provide financial backing for as many as three individuals to explore the world and push their limits through travel, connections, construction and communication.”

Does this sound like you?
Head over to the Lighthouse Foundation before 28 February 2017 to enter the first round of applications (via the creation of a YouTube video).

May the spirit of adventure continue to capture your heart and don’t forget to dream big, always! From audio to ambitious dreams, anything is possible in 2017.

BOOK: A Sense of the World: How a Blind Man Became History’s Greatest Traveler
by Jason Roberts

Listen to  my Audio Story: Many Different Hats

A New Adventure with Vision 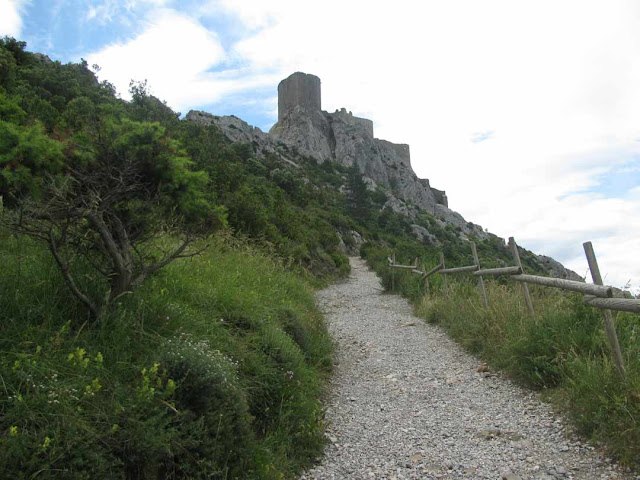 Vision isn’t enough unless combined with venture –It’s not enough to stare up the steps Unless we also step up the stairs.Vance Hayner


Gateway Readers – I have exciting news!

You may have thought I’ve been a little absent on the blogging front but to the contrary – I’ve been creating exciting new possibilities behind the scenes (with the maestro, Harry) that


There is a brand new portal where you can venture to and be kept up to date with ALL my articles, blog posts and words of advice – on mastering the ART of being blind and on the craft of writing.

I am grateful to my friend and designer, Bee Williamson who helped me to set up this blog with its many articles that llaunched my writing career back in 2011...and now we have come to the edge to a new horizon where I offer my hand of friendship to continue the journey together.

You will find an ever growing collection of:

Come on over to Maribelsteel.com and take a look around.

Let’s give my webmaster a real surprise by endorsing his work too!

My appreciation for your continued readership, see you at the ‘new gateway’ 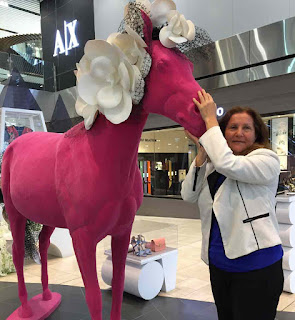 It has been said that art is a tryst, for in the joy of it maker and beholder meet. Kojiro Tomita

I Need To Learn Braille Better 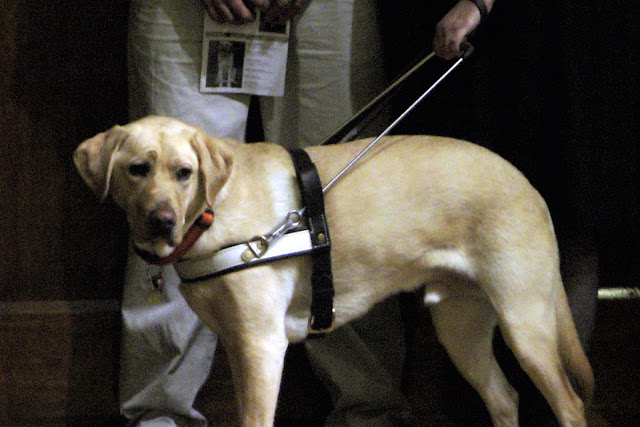 Dear Gateway readers, it gives me great pleasure to share the following account by my writer friend and RP colleague, Jeff Floddin who is based in Chicargo.

Even though we have only met across Cyberspace, one lovely gift that RP has brought into my life at least,  is the sharing of our stories: the good, the bad and the sometimes outrageously funny incidents that can catch us off guard with having such an eye condition.

Jeff’s reflections of how he adapts to losing his eyesight are like little gems of wisdom: his stories often move me and catch me off guard too. As we approach April 1st, I couldn’t think of a more fitting (and true) story that is bound to tickle your funny bone!.
*

We get on the elevator, Sherlock and me.  Sherlock is my guide dog.
We’re at the third floor of five.  We want to go down to the first floor.
The door slides shut.  Nothing happens.

I press the bottom button.  The door slides open.
“I need to learn Braille better,” I tell Sherlock.

I run my fingertips along the wall.  I think I find the Braille for number 1.
I press the button next to it.  The elevator goes up.
“I need to learn Braille better,” I tell Sherlock.

I stand tall and the buttons sit low.  It’s hard to read Braille with my finger upside down, so I drop to all fours.  Sherlock thinks it’s playtime.

He puts his elbows on my back and stands on his hind legs.
Then, God bless him, he begins to hump me.  He has assumed the Southwestern Sidewinder position.

While I’m thinking how I need to learn Braille better, I say to Sherlock, “Get off my back.”
The elevator stops and the door opens.
A woman gasps.  I crawl forward.  She steps backward.

I ask, “Can you help me?”
But I hear her heels run away from me, down the hallway.
The door closes.  Sherlock dismounts

I press another button.  The alarm sounds.  I press the button above that one.
The elevator goes down.  “This is security,” booms a big voice from a small speaker.    “What is your problem?”

I scramble to my feet, stand tall, remain mute and pat Sherlock’s head.
The door opens.  We’re at the first floor.

I command, “Sherlock, forward!”
The crowd parts.  We stride across the marble floor.  We project nonchalance.
I can tell what the people are thinking.
They’re thinking, “Look at that self-assured blind man and his well-trained guide dog.”

“This is security.” That voice again.
We keep walking.  The voice gets far away.  “What is your problem?”

“Problem?” I ask Sherlock.
“What problem?  I just need to learn Braille better, that’s all.”
*
NOTE:  Sherlock was Jeff’s Seeing Eye dog from 2003 to 2010.  A version of this story was published in Kaleidoscope magazine in 2012.
It also appeared on Jalapeños in the Oatmeal: Digesting Vision Loss by Jeff Flodin (March 16 2016).

About Jeff Floddin:
Jeff was diagnosed with Retinitis Pigmentosa at age 35.  His vision loss did not prevent him from moving around the country as he has lived in Rockford, Tempe, Philadelphia and Chicago.

Jeff received his Bachelor’s degree in International Relations from Lake Forest College.  He then earned a Master’s degree in social work from Arizona State University.  He worked in the social work field for 25 years.

Jeff wrote his first story in first grade and writing has been his primary vocation for ten years.  He is currently working on a short story collection about vision loss.  Jeff has completed two books, as of yet unpublished. His stories have appeared in “The Rockford Review” and his letters in “ChicagoTribune.”

Read more of Jeff’s stories at:https://jalapenosintheoatmeal.wordpress.com/
Posted by maribel steel at 11:45 am 1 comment:

What You Can Do with Time & Under Pressure 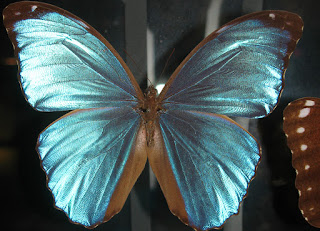 “God changes caterpillars into butterflies, sand into pearls and coal into diamonds
using time and pressure. He’s working on you, too!”
Rick Warren

Over the past few months, I have seen what I am capable of achieving with time and under pressure, some would call this working to a strict deadline.

My dear Gateway blog has taken a back seat as I have been furiously pumping out another  20 articles for the blindness.about.com site!

7: Transform a White Cane into Your Wand of Power

6: How to Blast 5 More Myths about Being Blind

5: Why Going Blind is not Losing Sight of Your Future

4: How Visually-impaired Moms Look after Their Kiddies

2: Use these 2 Super-Senses to Transform Disability into Possibility

1: Why You Need to Know the Truth about Blindness

And…there is one more bonus I just have to share with you.
A community event I designed that took place on November 8th 2015 called
Vision-quest Melbourne
Click on the link above to see all the magic of this awesome day.
Who knows, we could be coming to a city near you too!

Would be great to know what you have been doing with time and under pressure too…please leave your comments!

My deep thanks to my partner and tech wizard Harry Williamson, for film footage and for his tireless energy to produce our Youtube clip.